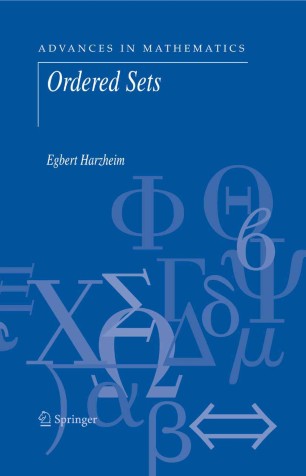 Part of the Advances in Mathematics book series (ADMA, volume 7)

The textbook literature on ordered sets is still rather limited. A lot of material is presented in this book that appears now for the first time in a textbook.

Order theory works with combinatorial and set-theoretical methods, depending on whether the sets under consideration are finite or infinite. In this book the set-theoretical parts prevail. The book treats in detail lexicographic products and their connections with universally ordered sets, and further it gives thorough investigations on the structure of power sets. Other topics dealt with include dimension theory of ordered sets, well-quasi-ordered sets, trees, combinatorial set theory for ordered sets, comparison of order types, and comparibility graphs.

This book is intended for mathematics students and for mathemeticians who are interested in set theory. Only some fundamental parts of naïve set theory are presupposed. Since all proofs are worked out in great detail, the book should be suitable as a text for a course on order theory.

"The exposition of material in Ordered Sets is generally quite clear. … The list of symbols is useful. … the book contains an unusual mix of topics that reflects both the author’s varied interests and developments in the theory of infinite ordered sets, particularly concerning universal orders, the splitting method, and aspects of well-quasi ordering. It will be of greatest interest to readers who want a selective treatment of such topics." (Dwight Duffus, SIAM Review, Vol. 48 (1), 2006)