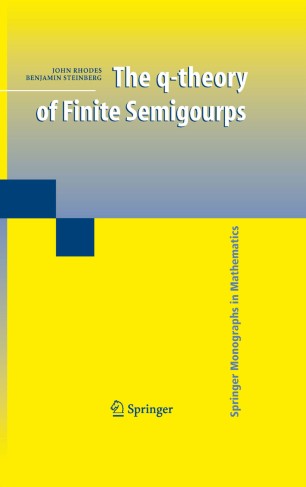 The q-theory of Finite Semigroups

Discoveries in finite semigroups have influenced several mathematical fields, including theoretical computer science, tropical algebra via matrix theory with coefficients in semirings, and other areas of modern algebra. This comprehensive, encyclopedic text will provide the reader – from the graduate student to the researcher/practitioner – with a detailed understanding of modern finite semigroup theory, focusing in particular on advanced topics on the cutting edge of research.

* Develops q-theory, a new theory that provides a unifying approach to finite semigroup theory via quantization;

* Develops the theory of profinite semigroups from first principles, making connections with spectra of Boolean algebras of regular languages;

* Presents over 70 research problems, most new, and hundreds of exercises.

* For newcomers, an appendix on elementary finite semigroup theory;

The q-theory of Finite Semigroups presents important techniques and results, many for the first time in book form, and thereby updates and modernizes the literature of semigroup theory.

“The book contains a plethora of exercises, not all routine, open problems and historical and mathematical discussions that are useful for students and researchers … . This work is a major contribution to the literature in finite semigroup theory and its applications. Both as a reference and as a research monograph pointing to new directions, it should be read in a deep way by anyone interested in this field.” (Stuart Margolis, Semigroup Forum, Vol. 89, 2014)

“The book contains a lot of new material on finite semigroup theory. In addition, each chapter of the book ends with … bibliographic notes. A large number of exercises … appear throughout the text. … an extensive bibliography, an index of notation, an author index and an index are also provided. In summary, this book is highly recommended. It provides everyone from graduate students to researchers/practitioners with modern finite semigroup theory at the cutting edge of research.” (Francine Blanchet Sadri, Mathematical Reviews, Issue 2010 h)

“The book contains an extremely helpful list of frequently used notation; on the web-page of the second author the interested reader will find a q-theory site where new developments and a few errors are documented. The reviewer is quite a bit impressed with this volume and is convinced that this monograph will become an indispensable source and means for everyone who wants to carry out relevant research in finite semigroup theory.” (Karl Auinger, Zentralblatt MATH, Vol. 1186, 2010)

“This is [a] first-rate presentation of modern finite semigroup theory by two of the currently most active researchers in this field. This is an essential reference for anyone wanting to know the present state-of-the-art in the algebraic theory of semigroups.” (Ronald I. Graham, UCSD)