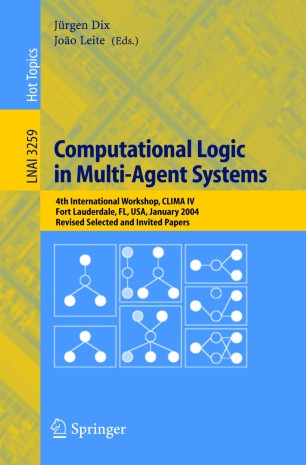 Over recent years, the notion of agency has claimed a major role in de?ning the trends of modern research. In?uencing a broad spectrum of disciplines such as sociology, psychology, philosophy and many more, the agent paradigm virtually invaded every sub?eld of computer science, because of its promising applications for the Internet and in robotics. Multi-agent systems (MAS) are communities of problem-solving entities that can perceive and act upon their environments to achieve their individual goals as well as joint goals. The work on such systems integrates many technologies and concepts in arti?cial intelligence and other areas of computing. There is a full spectrum of MAS applications that have been and are being developed: from search engines to educational aids to electronic commerce and trade. Although commonly implemented by means of imperative languages, mainly for reasons of e?ciency, the agent concept has recently increased its in?uence in the research and development of computational logic-based systems. Computational logic, by virtue of its nature both in substance and method, providesawell-de?ned,general,andrigorousframeworkforsystematicallystu- ing computation, be it syntax, semantics, and procedures, or implementations, environments, tools, and standards. Computational logic approaches problems, and provides solutions, at a su?cient level of abstraction so that they generalize from problem domain to problem domain, a?orded by the nature of its very foundation in logic, both in substance and method, which constitutes one of its major assets.