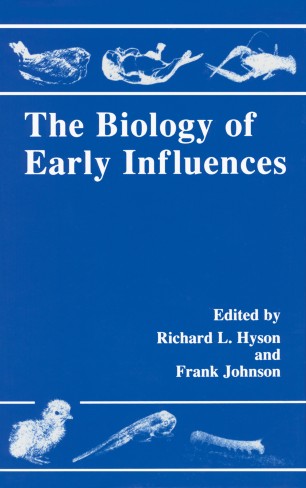 The Biology of Early Influences

The underlying theme of this book the role of experience in the development of the nervous system. It is now widely acknowledged that there are a variety of organi- environment interactions that guide the development of the nervous system. The popular press has also picked up on this theme and parents are being advised to enrich their child's sensory experience as early as possible. The importance of experience in development is so well accepted that it has begun to dictate public policy. In 1997, the President and First Lady hosted "The White House Conference on Early Childhood Development and Learning: What New Research on the Brain Tells Us About Our Youngest Children. " Along with this conference came a reemphasis on programs directed at enriching the en- ronment of America's youth. In some cases laws have been passed to assure enhanced early experience. In Georgia, the former governor proposed sending newborn children home from the hospital with classical music CDs. This received some praise, but was also ridiculed by others who felt the policy was not justified by the available scientific evidence. Here in Florida, enhanced "brain development activities" are mandated for sta- funded child care facilities. Chapter 402. 25 of the 1998 State of Florida Statues reads (emphasis added): Infants and toddlers in state-funded education and care programs; brain development activities.