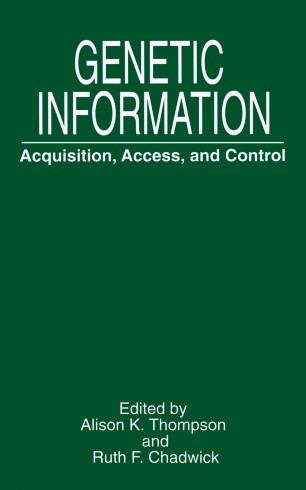 It is difficult to think of an example of an advancement in the biological sciences that has had an impact on society similar to that of the new genetics. Recent developments in biotechnology have occasioned much discussion among academics, professionals, and lay people alike. In particular, many questions and concerns have arisen over the acquisi­ tion, access, and control of genetic information. There are several reasons why the new genetics has commanded such widespread attention, and why it is now the subject of con­ siderable debate. Special reference is given in this volume to the implications of genetic information for five different subject areas: eugenics, the insurance industry, the commer­ cialisation of genetic testing, strategies for raising public awareness, and the value of theo­ retical ethical and sociological frameworks in the debate. This diverse collection of papers attempts to address and critically discuss issues surrounding the control of, and access to, genetic information from ethical, medical, legal, and theoretical points of view. The first and shortest section of the book attempts to address concerns over the eugenic potential of new biotechnologies. It also provides a historical context for the de­ bate, for controversy over the subject of eugenics predates the current debate over genetic information by a considerable length of time. Indeed, by the time the first patent was is­ sued for Chakrabarty's strain of oil eating bacteria in the early 1970s, the term eugenics had already acquired strong pejorative connotations.