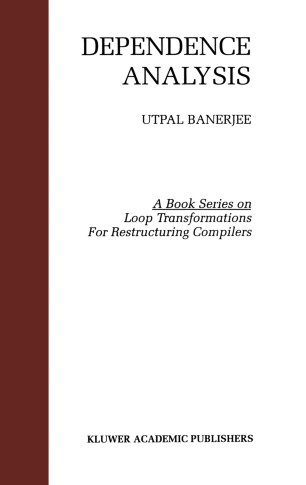 Dependence Analysis may be considered to be the second edition of the author's 1988 book, Dependence Analysis for Supercomputing. It is, however, a completely new work that subsumes the material of the 1988 publication. This book is the third volume in the series Loop Transformations for Restructuring Compilers. This series has been designed to provide a complete mathematical theory of transformations that can be used to automatically change a sequential program containing FORTRAN-like do loops into an equivalent parallel form.
In Dependence Analysis, the author extends the model to a program consisting of do loops and assignment statements, where the loops need not be sequentially nested and are allowed to have arbitrary strides. In the context of such a program, the author studies, in detail, dependence between statements of the program caused by program variables that are elements of arrays.
Dependence Analysis is directed toward graduate and undergraduate students, and professional writers of restructuring compilers. The prerequisite for the book consists of some knowledge of programming languages, and familiarity with calculus and graph theory. No knowledge of linear programming is required.