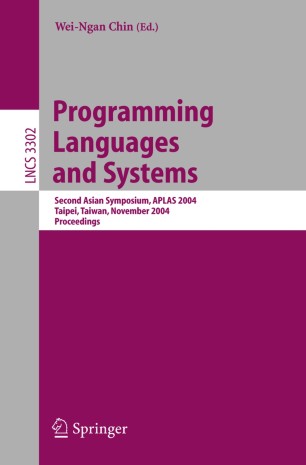 On behalf of the organizing committee I would like to welcome you all to the second Asian Symposium on Programming Languages and Systems (APLAS 2004) held in Taipei on November 4–6, 2004. Since the year 2000, researchers in the area of programming languages and systems have been meeting annually in Asia to present their most recent research results, thus contributing to the advancementofthisresearcharea.ThelastfourmeetingswereheldinSingapore (2000), Daejeon (2001), Shanghai (2002), and Beijing (2003). These meetings were very fruitful and provided an excellent venue for the exchange of research ideas, ?ndings and experiences in programming languages and systems. APLAS 2004 is the ?fth such meeting and the second one in symposium setting. The ?rst symposium was held in Beijing last year. The success of the APLAS series is the collective result of many people’s contributions.ForAPLAS2004,?rstIwouldliketothankallthemembersofthe Program Committee, in particular the Program Chair Wei-Ngan Chin, for their hardworkinputtingtogetheranexcellentprogram.Iammostgratefultoinvited speakers, Joxan Ja?ar, Frank Pfenning, and Martin Odersky, who have traveled a long way to deliver their speeches at APLAS 2004. I would like to thank all the referees, who helped review the manuscripts, the authors, who contributed to the proceedings of APLAS 2004, the members of the Organizing Committee, who made considerable e?ort to organize this event, and all the participants present at this meeting. Without your support this symposium would not have been possible. Finally I would like to acknowledge the support of the Asian Association for Foundation of Software and Academia Sinica, Taiwan.