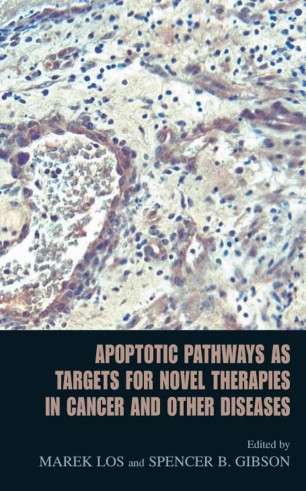 As our understanding of apoptotic pathway expands, we are coming to realize the great potential of utilizing this pathway to treat diseases such as cancer. The book attempts to review, summarize, and speculate on the apoptotic pathways, how are they regulated and how targeted therapies are being used to treat a wide variety of diseases. Special emphasis is placed on cancer since new treatments either being developed or currently in the clinical setting are showing great promise to increase survival rates for cancer patients. Chapters will address the biology behind regulating the apoptotic pathways and what goes wrong in disease states whereas other chapters will concentrate on new therapies targeting apoptotic pathways. The reader by the end of the book should have greater insight into the understanding and utilization of apoptotic pathways to fight diseases such as cancer.

THE NOVEL TARGETS, AND NEW PROMISE IN THE BATTLE AGAINST CANCER

This unusual and interesting book describes the main apoptotic pathways, their dysregulation in a majority of human illnesses, and novel therapeutic approaches developed to cure the diseases. The monograph is divided into 17 chapters that have been contributed by 46 authors from different countries, many of whom are leading authorities in their respective fields. Although the book covers a broad spectrum of problems, undoubtedly the approaches to the novel strategies of cancer treatment by regulation of apoptosis are the prevailing subject (12 chapters). Since this subject is of utmost interest for the readers of "The Lancet Oncology", the numerous aspects pertaining to non-cancer disorders inevitably have escaped my review at this time. Nevertheless, the development of novel therapeutics designed to modulate apoptosis in such conditions as acute or chronic diseases of the heart, the liver, and nervous system, as well as autoimmune and infection diseases is undoubtedly as important for modern, basic and applied research.

The book commences with a chapter "Apoptotic Pathways and Their Regulation" by G. Brouckaert and co-authors which gives basic principles of apoptotic machinery functioning. The first portion of the chapter covers the caspase family of endopeptidases, which play a pivotal role in apoptotic cell dismantling followed by the analysis of other cell death signalling molecules, including the family of Bcl-2-like proteins. The current knowledge on the main players of cellular pathways suppressing apoptosis is briefly described, and then several forms of caspase-independent cell death, distinctive from apoptosis, are also considered. The chapter can be read with profit by non-specialists who are curious to learn more about drugs that target disturbed apoptosis but who have a limited knowledge regarding molecular mechanisms of cell death.

After the introductory chapter, the book treats such topics as mechanisms of anti-cancer drug action (Chapter II) and the components of extrinsic (death receptor) or intrinsic (mitochondrial) death pathways (Chapters III and V) as suitable objects for targeted therapy. The exploitation of survivin, XIAP, Smac, Omi, p53, and growth factor/growth factor receptor-signalling pathway as attractive targets for the development of anti-cancer agents is discussed in chapters VI, VII and VIII, respectively. The monoclonal antibodies, recombinant proteins, peptides, small organic molecules, antisense oligonucleotides, RNA interference (RNAi) and gene constructs represent new treatment modalities which have already shown most promising results in pre-clinical or clinical studies. The finding presented in these chapters have demonstrated that many of these new compounds are capable of activating apoptosis selectively in malignant cells thereby having less severe side effects than conventional cytotoxic drugs. As for myself, the most interesting apoptosis-related pharmacological strategies of drug designed for cancer treatment were those targeted protein refolding. It is encouraging that such a small molecule as, for example, PRIMA, can reactivate mutant p53-dependent transcription and apoptosis in vivo, suggesting the feasibility of this approach for reactivation of any other mutated proteins. The pharmacological inhibition of cell survival signalling has an enormous potential (see the chapter entitled "Growth factors, receptors, and kinases: their exploration to target cancer"), although some disappointing results of clinical studies of kinase inhibitors in cancer patients unfortunately escape the authors` attention.

Novel therapeutics which selectively target gene or protein NF-kappaB are critically analyzed in the chapters "Nuclear transcription factor-kB: a drug target for all seasons" by Garg & Aggarwal and "Targeting the proteasome in cancer therapy" by Orlowsky. Especially useful at this point is the detailed information on the cellular pathways leading to NF-kappaB activation as well as its involvement in tumour promotion and cellular resistance to different treatments. It would be of interest to learn that there are over 150 exogenous inhibitors of NF-kappaB both natural and that of synthetic origin. The most potent among them is proteasome inhibitor PS-341 (now known as bortezomib), which has been already assayed in a variety of trials including clinical studies in phase III setting. The discussion of these promising clinical results obtained for bortezomib used both in haematologic malignancies and solid tumours is thorough and concise, based on careful analyses and personal experiences. Nevertheless, the observations on knockouts mice that complete deficiency of NF-kappaB gene may result in serious toxicity and prenatal death should also be taken into account. In this context, the author himself states precautionary: "It is clear that effective drug development, targeting kB must focus on its partial and specific inhibition" (p. 314).

The eleventh and thirteenth chapters are, respectively, devoted to the therapeutic value of monoclonal antibodies and RNAi-based therapeutics, the subjects each of which alone could occupy a whole book. Besides the well-known strategies, involving the therapeutic use of the monoclonal antibodies, Jung and colleagues describe rather new anti-cancer approach based on bispecific antibodies with Tumour X Fas-specificity. The authors note that in addition to specific induction of apoptosis in tumour cells, the therapeutic benefit of these antibodies may be realized via the inhibition of tumour angiogenesis. Nevertheless, I have not found strong evidence in the body of their chapter actually supporting that assumption. Lin and Ying describe in detail their own vector-based D-RNAi (cDNA-mRNA hybrid interference) strategy and D-RNAi-derived microRNA agents developed for therapeutic purposes. The opportunities and the prospects for killing tumour cells by silencing apoptosis-related genes using D-RNAi-based therapeutics are also discussed.

The methodology used for checking apoptosis is thoroughly treated by Los and his co-authors. This chapter contains the detailed protocols for accurate detection and quantification of dying cells including Western blotting, flow cytometry, ELISA, etc. All these contemporary techniques, together with the required equipment are described in lucid details. Of particular interest is the application of the highly sensitive cytochrome c-based technique to monitor cytochrome c level (specific for apoptosis) in the serum of cancer patients under therapeutic intervention.

The book ends with two chapters that revolve around the problem of minimizing chemotherapy-related undesirable side effects. The chapter "Current strategies in tumour targeting" by W. Mier and others focuses on the reduction of systemic toxicity of chemotherapeutics at the account of tumour-specific drug delivery (or releasing from prodrugs). Alternatively, Blagosklonny and Darzynkiewicz consider therapeutic strategy based on consecutive use of cytostatic drugs to arrest normal cells and to reactivate apoptosis in malignant ones, and chemotherapeutic agents selectively killing neoplastic cells. Whether these drug combinations will result in more effective treatment of cancer patients remains to be seen in the forthcoming clinical investigations. Additionally, the novel promising approaches relying on the rational drug combinations including sensitizers to conventional chemo- and radiotherapy are mentioned in other sections of the book (chapters V-VIII and XI-XIV).

The appendix includes a comprehensive and detailed summary table on the new therapeutic agents designed to treat various diseases and injury states (14 pp.). About 80 different drug candidates targeting death pathways are listed. Especially useful are the references to the number of the Chapter dealing with particular therapeutic agent.

Unfortunately, the modern non-invasive technologies for in vivo visualization of apoptotic cells, such as PET, SPECT, MRI, MRS, ultrasound and real-time imaging, are entirely omitted. It is a pity that the book provides no more than scanty information on the potential for utilization of apoptosis-regulated genes and proteins as prognostic and/or predictive markers in spite of hundreds of clinical cancer research trials on this important and rapidly growing subject. Finally, to my mind, the lack of the list of contributors is a disadvantage of the book design.

Setting these criticisms apart, I am confident that Apoptotic Pathways as Targets for Novel Therapies in Cancer and Other Diseases is an excellent monograph whose strength is the collection of articles ranging over almost all aspects of development and application of novel drugs targeting death pathways. Undoubtedly, it is an essential purchase for all relevant libraries.