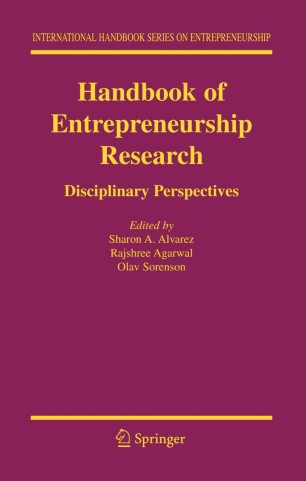 What should the domain of entrepreneurship studies include? Though many scholars of entrepreneurship have cautioned and even argued strongly against limiting the focus of research to the entrepreneur (Gartner, 1988; Low and MacMillan, 1988), the last two decades have nonetheless seen an increased focus on the individual and that individual's recognition of opportunities in the study of entrepreneurship (Venkataraman, 1997). While many of these articles have been fruitful to increasing our understanding of the challenges entrepreneurs face, numerous important topics, particularly those with more relevance to scholarship and theory than to the practice of entrepreneurship, have been left underdeveloped. For example, less research has focused on the importance of the macroeconomic environment to firm founding, on social and kinship ties as sources of entrepreneurial activity, and the interaction between institutions and entrepreneurship.

In the Handbook of Entrepreneurship Research: Disciplinary Perspectives, we strive to increase awareness and stimulate research on these topics in the literature on entrepreneurship. We do so by drawing attention to the relevant research in the disciplines of economics and sociology. This volume of the handbook hopes to begin to bridge the gap between the research in entrepreneurship and the core disciplines by introducing three views of entrepreneurship from disciplinary perspectives. In particular, the chapters in this volume focus on entrepreneurship as it is informed by research in the economic theories of the firm, labor economics, and sociology. As such, the second volume of the handbook is intended to complement and build on the first volume by focusing on a select set of issues and examining them in an in-depth manner. Thus, while we continue in the tradition established in the first volume, that of drawing from the rich disciplinary perspectives, we abstract away from topics that have received much attention in the first volume (and in other entrepreneurship related collections (e.g. small business economics, psychological and other traits of entrepreneurs) to avoid redundancy. Instead, we hope that the chapters in the second volume inform entrepreneurship researchers of new and fruitful avenues to benefit from work that may not have received as much prominent attention as have other areas.