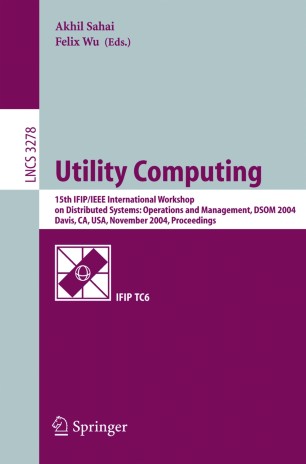 This volume of the Lecture Notes in Computer Science series contains all the papersacceptedforpresentationatthe13thIFIP/IEEEInternationalWorkshop on Distributed Systems: Operations and Management (DSOM 2004), which was held at the University of California, Davis during November 15–17, 2004. DSOM2004wasthe?fteenthworkshopinaseriesofannualworkshopsandit followed in the footsteps of highly successful previous meetings, the most recent of which were held in Heidelberg, Germany (DSOM 2003), Montreal, Canada (DSOM 2002), Nancy, France (DSOM 2001), and Austin, USA (DSOM 2000). The goal of the DSOM workshops is to bring together researchers in the areas of networks, systems, and services management, from both industry and academia, to discuss recent advances and foster future growth in this ?eld. In contrast to the larger management symposia, such as IM (Integrated Management) and NOMS (Network Operations and Management Symposium), the DSOM wo- shops are organized as single-track programs in order to stimulate interaction among participants. The focus of DSOM 2004 was “Management Issues in Utility Computing. ” Increasingly there is a trend now towards managing large infrastructures and services within utility models where resources can be obtained on demand. Such a trend is being driven by the desire to consolidate infrastructures within - terprises and across enterprises using third-party infrastructure providers and networked infrastructures like Grid and PlanetLab. The intent in these init- tives is to create systems that provide automated provisioning, con?guration, and lifecycle management of a wide variety of infrastructure resources and s- vices, on demand.