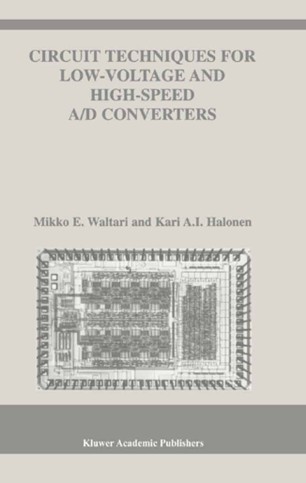 Part of the The International Series in Engineering and Computer Science book series (SECS, volume 709)

For four decades the evolution of integrated circuits has followed Moore’s law, according to which the number of transistors per square millimeter of silicon doubles every 18 months. At the same time transistors have become faster, making possible ever-increasing clock rates in digital circuits. This trend seems set to continue for at least another decade without slowing down. Thus, in the near future the processing power of digital circuits will continue to increase at an accelerating pace. For analog circuits the evolution of technology is not as beneficial. Thus, there is a trend to move signal processing functions from the analog domain to the digital one, which, besides allowing for a higher level of accuracy, provides savings in power consumption and silicon area, increases robustness, speeds up the design process, brings flexibility and programmability, and increases the possibilities for design reuse. In many applications the input and output signals of the system are inherently analog, preventing all-digital realizations; at the very least a conversion between analog and digital is needed at the - terfaces. Typically, moving the analog-digital boundary closer to the outside world increases the bit rate across it. In telecommunications systems the trend to boost bit rates is based on - ploying widerbandwidths and a higher signal-to-noise ratio. At the same time radio architectures in many applications are evolving toward software-defined radio, one of the main characteristics of which is the shifting of the anal- digital boundary closer to the antenna.