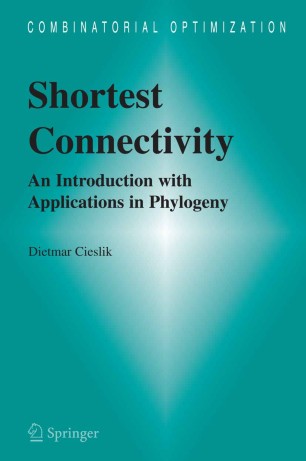 An Introduction with Applications in Phylogeny

The problem of "Shortest Connectivity" has a long and convoluted history: given a finite set of points in a metric space, search for a network that connects these points with the shortest possible length. This shortest network must be a tree and may contain vertices different from the points which are to be connected. Over the years more and more real-life problems are given, which use this problem or one of its relatives as an application, as a subproblem or a model.

This volume is an introduction to the theory of "Shortest Connectivity", as the core of the so-called "Geometric Network Design Problems", where the general problem can be stated as follows: given a configuration of vertices and/or edges, find a network which contains these objects, satisfies some predetermined requirements, and which minimizes a given objective function that depends on several distance measures. A new application of shortest connectivity is also discussed, namely to create trees which reflect the evolutionary history of "living entities".

The aim in this graduate level text is to outline the key mathematical concepts that underpin these important questions in applied mathematics. These concepts involve discrete mathematics (particularly graph theory), optimization, computer science, and several ideas in biology.