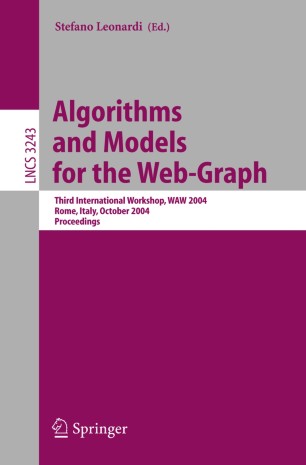 WAW: International Workshop on Algorithms and Models for the Web-Graph

Algorithms and Models for the Web-Graph

This volume contains the 14 contributed papers and the contribution of the distinguished invited speaker B´ ela Bollob´ as presented at the 3rd Workshop on Algorithms and Models for the Web-Graph (WAW 2004), held in Rome, Italy, October 16, 2004, in conjunction with the 45th Annual IEEE Symposium on Foundations of Computer Science (FOCS 2004). The World Wide Web has become part of our everyday life and information retrievalanddataminingontheWebisnowofenormouspracticalinterest.Some of the algorithms supporting these activities are based substantially on viewing the Web as a graph, induced in various ways by links among pages, links among hosts, or other similar networks. Theaimofthe2004WorkshoponAlgorithmsandModelsfortheWeb-Graph was to further the understanding of these Web-induced graphs, and stimulate the development of high-performance algorithms and applications that use the graphstructureoftheWeb.Theworkshopwasmeantbothtofosteranexchange of ideas among the diverse set of researchers already involved in this topic, and to act as an introduction for the larger community to the state of the art in this area. This was the third edition of a very successful workshop on this topic, WAW 2002 was held in Vancouver, Canada, in conjunction with the 43rd - nual IEEE Symposium on Foundations of Computer Science, FOCS 2002, and WAW 2003 was held in Budapest, Hungary, in conjunction with the 12th Int- national World Wide Web Conference, WWW 2003. This was the ?rst edition of the workshop with formal proceedings.