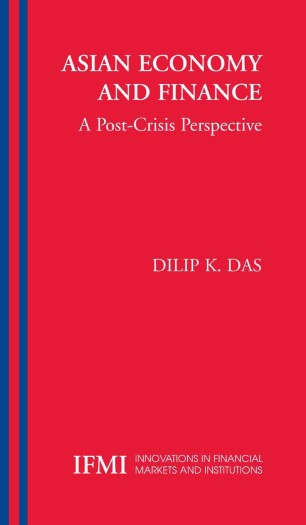 Part of the Innovations in Financial Markets and Institutions book series (IFMI, volume 14)

Topicality of Asian economy has refused to fade for almost four decades; if anything it has been levitating. The Asian economy has changed markedly since the economic and financial crisis of 1997-1998 and is continuing to evolve.   As a scholarly subject matter, Asian economy has not stopped attracting academicians, policy mandarins, decision makers in the arena of business and students of Asian economy. The Asian crisis was a cataclysmic event for the region and brought to the surface several systemic limitations, like those in the financial sector, corporate governance, regulatory oversight, legal framework, and exchange rate management. Managers of Asian economy need to get to the bottom of these acutely problematical systemic issues. Additionally, Asian economies need to change with the demands of time and devise their post-crisis development strategy. Asia’s growth model, that served it so well for four decades, is overdue for renewal so that it can re-strengthen its bonds with the ever-evolving regional and global economic reality. The old growth model is likely to be less relevant and effective in the post-crisis future of the Asian economies. It is sure to run into the wall of diminishing returns.

An outstanding feature of Asian Economy and Finance: A Post-Crisis Perspective is that unlike most Asia-related books, it is written in a comprehensive and authoritative manner and covers large areas of Asian macro-economy and finance. The noteworthy areas of focus include global and intra-regional trade and investment, as well as financial and monetary aspects. In-depth discussions have been provided on regional integration through expanding trade, financial flows, regional production networks, financial and monetary co-operation. In taking a contemporary or post-crisis view of the Asian economy, this book offers the newest knowledge related to relevant themes on the Asian economies as well as the latest concepts. In a succinct manner, this book deals with the principal normative and positive strands with which one need to be properly familiar in this subject area. This tightly written volume covers a great deal of ground and imparts knowledge on the Asian economy related themes to students, researchers and policy makers alike.

Asian Economy and Finance: A Post-Crisis Perspective is neither overly technical nor model-oriented. It is easy to access for the target readership because of its descriptive analysis style, which stops short of mathematical formulations and econometric modeling. Many students and other readers who have good analytical minds and sound knowledge of economic principles feel lost in mathematical formulations. This writing style makes it accessible to a much larger number of readers.