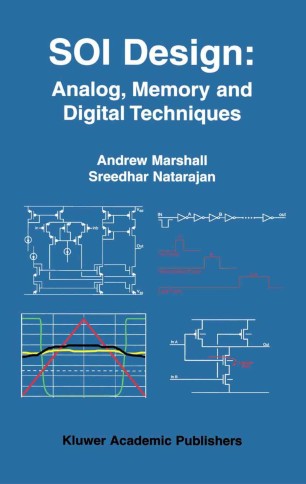 Silicon on insulator (SOI) is a very attractive technology for large volume integrated circuit production and is particularly good for low-voltage, low-power and high-speed digital systems. SOI has also proved to be effective in various niche and growing markets. IC processes based on SOI are known to reduce susceptibility to radiation, and have been used for many years in high radiation environments. SOI is also used for power integrated circuits, micro-electromechanical systems (MEMS), integrated optics and high temperature applications.
SOI offers numerous opportunities and challenges in the design of low-voltage and low-power CMOS circuits for both analog and digital applications. The benefits of this technology for digital applications have been clear for many years. The exploitation of SOI for analog and memory subsystems, meanwhile, has lagged behind digital developments, but is now beginning to attain a level of parity, with circuits that are in some cases improved over their bulk counterparts. SOI is suitable for digital, memory and analog designs, although it is not necessarily straightforward to convert circuits developed for bulk processes into SOI.
Memory and most analog circuits either interface to, or are incorporated within, a digital environment. The design of analog circuits on SOI, in a mixed signal environment, and memory design in an embedded memory application are discussed. Various processes are examined and comparison is made between bulk and SOI circuit design concepts. SOI is the process of choice in various RF applications, particularly when digital circuitry is required.
SOI Design: Analog Memory and Digital Techniques examines some of the basics, but is primarily concerned with circuit related issues. Static and dynamic logic circuit design has previously been studied in some detail, however, memory design for SOI and analog circuit designs have hitherto been examined only in a piecemeal manner.
SOI material is considered here in terms of implementation that are promising or have been used elsewhere in circuit development, with historical perspective where appropriate.
SOI Design: Analog, Memory and Digital Techniques will be of interest to circuit design engineers. It is also intended as a general graduate level text to introduce state of the art design principles for SOI circuit design.