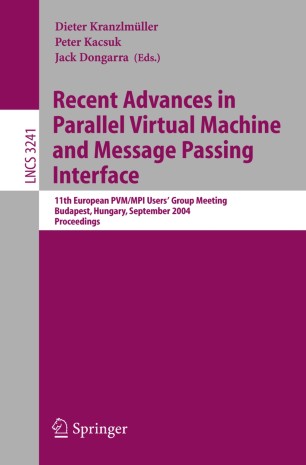 The message passing paradigm is the most frequently used approach to develop high-performancecomputing applications on paralleland distributed computing architectures. Parallel Virtual Machine (PVM) and Message Passing Interface (MPI) are the two main representatives in this domain. This volume comprises 50 selected contributions presented at the 11th - ropean PVM/MPI Users’ Group Meeting, which was held in Budapest, H- gary, September 19–22, 2004. The conference was organized by the Laboratory of Parallel and Distributed Systems (LPDS) at the Computer and Automation Research Institute of the Hungarian Academy of Sciences (MTA SZTAKI). The conference was previously held in Venice, Italy (2003), Linz, Austria (2002), Santorini, Greece (2001), Balatonfu ¨red, Hungary (2000), Barcelona, Spain (1999), Liverpool, UK (1998), and Krakow,Poland (1997).The ?rst three conferences were devoted to PVM and were held in Munich, Germany (1996), Lyon, France (1995), and Rome, Italy (1994). In its eleventh year, this conference is well established as the forum for users and developers of PVM, MPI, and other messagepassing environments.Inter- tionsbetweenthesegroupshaveprovedtobeveryusefulfordevelopingnewideas in parallel computing, and for applying some of those already existent to new practical?elds.Themaintopicsofthe meeting wereevaluationandperformance of PVM and MPI, extensions, implementations and improvements of PVM and MPI, parallel algorithms using the message passing paradigm, and parallel - plications in science and engineering. In addition, the topics of the conference were extended to include cluster and grid computing, in order to re?ect the importance of this area for the high-performance computing community.