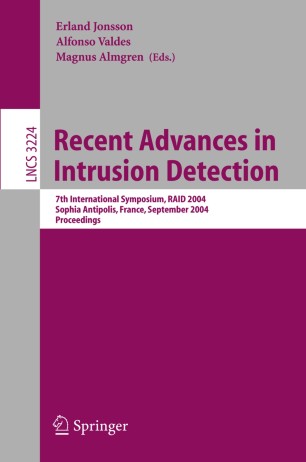 On behalf of the Program Committee, it is our pleasure to present to you the proceedings of the 7th Symposium on Recent Advances in Intrusion Detection (RAID 2004), which took place in Sophia-Antipolis, French Riviera, France, September 15–17, 2004. The symposium brought together leading researchers and practitioners from academia, government and industry to discuss intrusion detection from research as well as commercial perspectives. We also encouraged discussions that - dressed issues that arise when studying intrusion detection, including infor- tion gathering and monitoring, from a wider perspective. Thus, we had sessions on detection of worms and viruses, attack analysis, and practical experience reports. The RAID 2004 Program Committee received 118 paper submissions from all over the world. All submissions were carefully reviewed by several members of the Program Committee and selection was made on the basis of scienti?c novelty, importance to the ?eld, and technical quality. Final selection took place at a meeting held May 24 in Paris, France. Fourteen papers and two practical experience reports were selected for presentation and publication in the conf- ence proceedings. In addition, a number of papers describing work in progress were selected for presentation at the symposium. The keynote addresswas given by Bruce Schneier of Counterpane Systems. H? akan Kvarnstrom ¨ of TeliaSonera gave an invited talk on the topic “Fighting Fraud in Telecom Environments. ” A successful symposium is the result of the joint e?ort of many people.