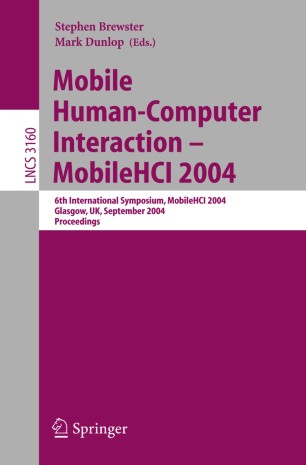 MobileHCI is a forum for academics and practitioners to discuss the challenges and potential solutions for e?ective human-computer interaction with mobile systems and services. It covers the design, evaluation and application of te- niques and approaches for all mobile computing devices and services. MobileHCI 2004 was the sixth in the series of conferences that was started at Glasgow U- versity in 1998 by Chris Johnson. We previously chaired the conference in 1999 in Edinburgh (as part of INTERACT 1999) and in 2001 in Lille (as part of IHM-HCI 2001). The last two years saw the conference move to Italy, ?rst - der the chairmanship of Fabio Patern` o in Pisa then under Luca Chittaro in Udine. In 2005 the conference will move to Austria to be chaired by Manfred Tscheligi. Each year the conference has its own website hosted by the conference chair, however the address www. mobilehci. org will always point to the next (or current) conference. The number of submissions has increased every year. This year we received 79 full papers (63 were received last year) from which we accepted the best 25. We had 81 short papers and posters submitted (59 last year) and accepted 20 of these as short papers and 22 as posters. We received 9 workshop, 4 tutorial and 2 panel proposals, from which 5, 2 and 2, respectively, were accepted.