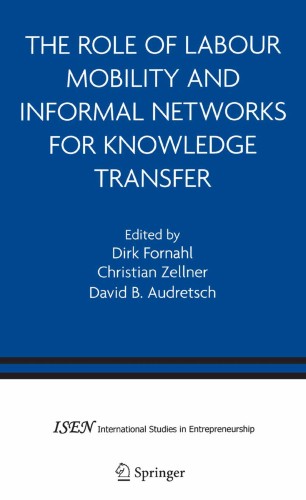 The Role of Labour Mobility and Informal Networks for Knowledge Transfer

No field in economics has dealt extensively with the microeconomics of knowledge spillovers. Thus, it is important to include the perspectives and insights of research approaches that span a broad spectrum of fields in economics. This work brings together scholars from labor economics, regional economics, the economics of innovation and technological change, and sociology to introduce new insights yielded from the microfoundations of knowledge spillovers.

Dirk Fornahl studied economics and business administration at the University of Hannover (Germany), at the Dublin City University (Dublin, Ireland) and at the University of California (Berkeley, USA) with a focus on Economic Policy, Environmental Economics and Systems Management, and Labour Economics. Since 1999 Research Associate at the Max Planck Institute for Research into Economic Systems, Evolutionary Economics Group. From June 1999 until May 2001 working in the 'InnoRegio' programme of the Federal Ministry of Education and Science.

Christian Zellner studied development economics at the University of Kent and the University of Cambridge (United Kingdom). He has worked as a Research Associate in the Evolutionary Economics Group at the Max Planck Institute for Research into Economic Systems (Germany) since 2000. His research mainly focuses on the formation of human capital and embodied knowledge transfers. He received his Ph.D. from the Friedrich Schiller University Jena in 2003 for a thesis on the effects of basic research on the dynamics of the innovation process.

David B. Audretsch is the Director of the Research Unit on Entrepreneurship, Growth and Public Policy at the Max Planck Institute for Research into Economics Systems in Germany and a Research Fellow of the Centre for Economic Policy Research (London). He also serves as the Ameritech Chair of Economic Development at Indiana University. Audretsch's research has focused on the links between entrepreneurship, government policy, innovation, economic development and global competitiveness. He has consulted with the World Bank, National Academy of Sciences, U.S. State Department, United States Federal Trade Commission, General Accounting Office and International Trade Commission as well as the United Nations, Commission of the European Union, the European Parliament, the OECD, as well as numerous private corporations, state governments, and a number of European Governments. He is a member of the Advisory Board to a number of international research and policy institutes, including the Zentrum fuer Europaeisch Wirtschaftsforschung (ZEW, Centre for Economic Research), Mannheim, the Hamburgisches Welt-Wirtschafts-Archiv (HWWA, Hamburg Institute of International Economics), the Swedish Foundation for Research on Entrepreneurship and Small Business, and the American Institute for Contemporary German Studies (AICGS), Washington, D.C. His research has been published in over one hundred scholarly articles in the leading academic journals. He has published thirty books including, Innovation and Industry Evolution, with MIT Press. He is co-founder and co-editor of Small Business Economics: An International Journal. He was awarded the 2001 International Award for Entrepreneurship and Small Business Research by the Swedish Foundation for Small Business Research.