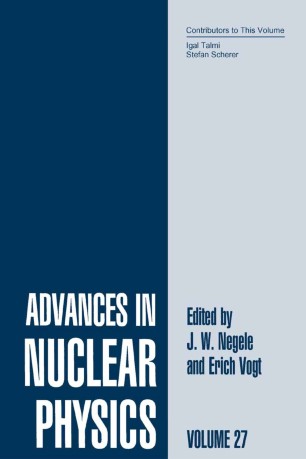 Part of the Advances in Nuclear Physics book series (volume 27)

This volume contains two major articles, one providing a historical retrosp- tive of one of the great triumphs of nuclear physics in the twentieth century and the other providing a didactic introduction to one of the quantitative tools for understanding strong interactions in the twenty-first century. The article by Igal Talmi on “Fifty Years of the Shell Model – the Quest for the Effective Interaction”, pertains to a model that has dominated nuclear physics since its infancy and that developed with astonishing results over the next five decades. Talmi is uniquely positioned to trace the history of the Shell Model. He was active in developing the ideas at the shell model’s inception, he has been central in most of the subsequent initiatives which expanded, cl- ified and applied the shell model and he has remained active in the field to the present time. Wisely, he has chosen to restrict his review to the domin- ing issue: the choice of the effective interactions among valence nucleons that determine the properties of low lying nuclear energy levels. The treatment of the subject is both bold and novel for our series. The ideas pertaining to the effective interaction for the shell model are elucidated in a historical sequence.