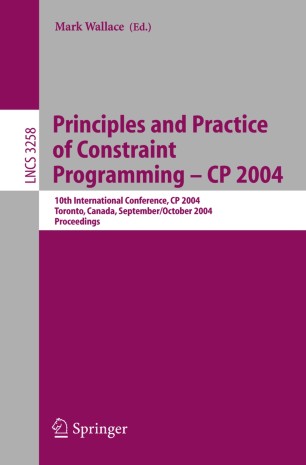 CP: International Conference on Principles and Practice of Constraint Programming

The 10th International Conference on the Principles and Practice of Constraint Programming (CP 2003) was held in Toronto, Canada, during September 27 – October 1, 2004. Information about the conference can be found on the Web at http://ai.uwaterloo.ca/~cp2004/ Constraint programming (CP) is about problem modelling, problem solving, programming, optimization, software engineering, databases, visualization, user interfaces, and anything to do with satisfying complex constraints. It reaches into mathematics, operations research, arti?cial intelligence, algorithms, c- plexity, modelling and programming languages, and many aspects of computer science. Moreover, CP is never far from applications, and its successful use in industry and government goes hand in hand with the success of the CP research community. Constraintprogrammingcontinuesto beanexciting,?ourishingandgrowing research?eld,astheannualCPconferenceproceedingsamplywitness.Thisyear, from 158 submissions, we chose 46 to be published in full in the proceedings. Instead of selecting one overall best paper, we picked out four “distinguished” papers – though we were tempted to select at least 12 such papers. In addition we included 16 short papersin the proceedings– these were presentedas posters at CP 2004. This volume includes summaries of the four invited talks of CP 2004. Two speakers from industry were invited. However these were no ordinary industrial representatives,buttwoofthe leadingresearchersinthe CPcommunity:Helmut Simonis of Parc Technologies, until its recent takeover by Cisco Systems; and Jean Francoi ¸ s Puget, Director of Optimization Technology at ILOG. The other two invited speakers are also big movers and shakers in the researchcommunity.