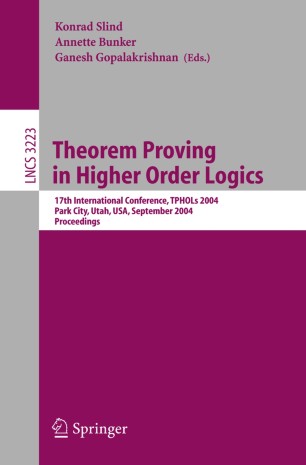 This volume constitutes the proceedings of the 17th International Conference on Theorem Proving in Higher Order Logics (TPHOLs 2004) held September 14–17, 2004 in Park City, Utah, USA. TPHOLs covers all aspects of theorem proving in higher-order logics as well as related topics in theorem proving and veri?cation. There were 42 papers submitted to TPHOLs 2004 in the full research ca- gory, each of which was refereed by at least 3 reviewers selected by the program committee. Of these submissions, 21 were accepted for presentation at the c- ference and publication in this volume. In keeping with longstanding tradition, TPHOLs 2004 also o?ered a venue for the presentation of work in progress, where researchers invited discussion by means of a brief introductory talk and then discussed their work at a poster session. A supplementary proceedings c- taining papers about in-progress work was published as a 2004 technical report of the School of Computing at the University of Utah. The organizers are grateful to Al Davis, Thomas Hales, and Ken McMillan for agreeing to give invited talks at TPHOLs 2004. The TPHOLs conference traditionally changes continents each year in order to maximize the chances that researchers from around the world can attend.