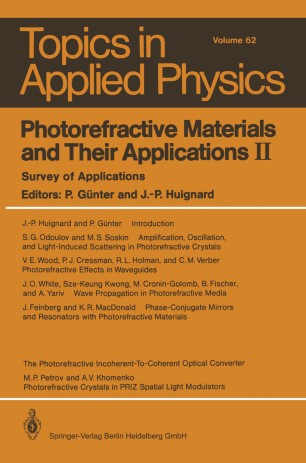 Photorefractive Materials and Their Applications II

This is the second of two volumes that review, for the first time, all major aspects of photorefractive effects and their applications. Photorefractive effects in electro-optic crystals are based on optically induced space-charge fields which ultimately alter the refractive indices by the electro-optic Pockels effect. The fundamental phenomena leading to photoinduced changes of refractive index, the materials requirements and experimental results on a variety of photorefractive materials are discussed and the most recent theoretical models describing these phenomena are presented. Interest in photorefractive materials has increased in recent years mainly because of their potential for nonlinear optical devices and for optical signals processing applications. Most of these applications are reviewed in this volume. The contributions to the two volumes are written by experts on each topic and are intended for scientists and engineers active in the field and for researchers and graduate students entering the field. Over 300 references to original papers on photorefractive and associated phenomena are cited. Volume 1 appeared as Volume 61 of Topics in Applied Physics.