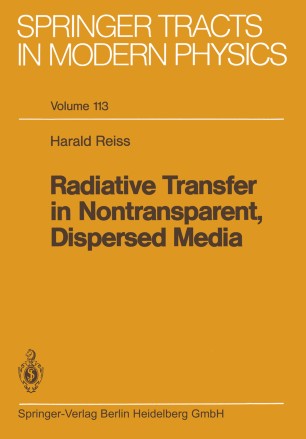 Existing standard textbooks on radiative transfer (RT) are usually confined to theoretical models with little reference to experimental methods. This book has been written to illustrate how calorimetric and spectroscopic measurements can be used to check theoretical predictions on extinction properties of infrared radiation in optically thick, absorbing and scattering particulate media. A determination of infrared extinction coefficients is now possible from three completely independent methods. An interpretation of the results of thermal conductivity measurements is made in terms of the diffusion model of RT. One of the most important topics of the book is the experimental separation of heat transfer modes. Since all modes other than scattered radiation are coupled by temperature profiles, conservation of energy also requires an understanding of the non-radiative heat flow components. Unlike other volumes on RT, this book also contains a review of non-radiative heat flow mechanisms. Thus the book does not treat RT as an isolated phenomenon but stresses the key role of RT among the other transport processes. A considerable part of the book is devoted to the calculation of extinction cross sections by application of Mie theory, anisotropic and dependent scattering, optimization of radiation extinction by experimental means, existence or non-existence of thermal conductivity, and other general questions within the field of thermophysics.