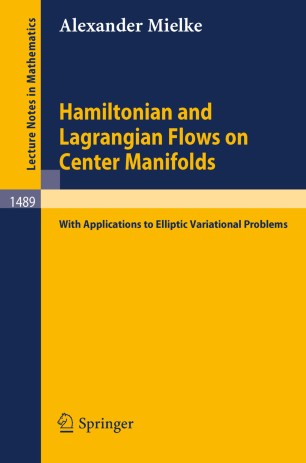 with Applications to Elliptic Variational Problems

The theory of center manifold reduction is studied in this monograph in the context of (infinite-dimensional) Hamil- tonian and Lagrangian systems. The aim is to establish a "natural reduction method" for Lagrangian systems to their center manifolds. Nonautonomous problems are considered as well assystems invariant under the action of a Lie group ( including the case of relative equilibria). The theory is applied to elliptic variational problemson cylindrical domains. As a result, all bounded solutions bifurcating from a trivial state can be described by a reduced finite-dimensional variational problem of Lagrangian type. This provides a rigorous justification of rod theory from fully nonlinear three-dimensional elasticity. The book will be of interest to researchers working in classical mechanics, dynamical systems, elliptic variational problems, and continuum mechanics. It begins with the elements of Hamiltonian theory and center manifold reduction in order to make the methods accessible to non-specialists, from graduate student level.