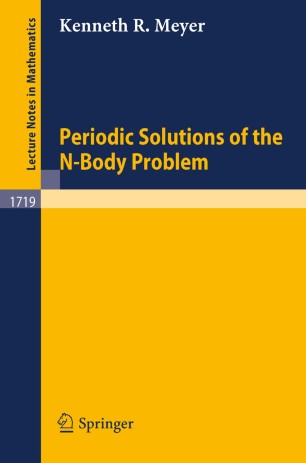 Periodic Solutions of the N-Body Problem

The N-body problem is the classical prototype of a Hamiltonian system with a large symmetry group and many first integrals. These lecture notes are an introduction to the theory of periodic solutions of such Hamiltonian systems. From a generic point of view the N-body problem is highly degenerate. It is invariant under the symmetry group of Euclidean motions and admits linear momentum, angular momentum and energy as integrals. Therefore, the integrals and symmetries must be confronted head on, which leads to the definition of the reduced space where all the known integrals and symmetries have been eliminated. It is on the reduced space that one can hope for a nonsingular Jacobian without imposing extra symmetries. These lecture notes are intended for graduate students and researchers in mathematics or celestial mechanics with some knowledge of the theory of ODE or dynamical system theory. The first six chapters develops the theory of Hamiltonian systems, symplectic transformations and coordinates, periodic solutions and their multipliers, symplectic scaling, the reduced space etc. The remaining six chapters contain theorems which establish the existence of periodic solutions of the N-body problem on the reduced space.