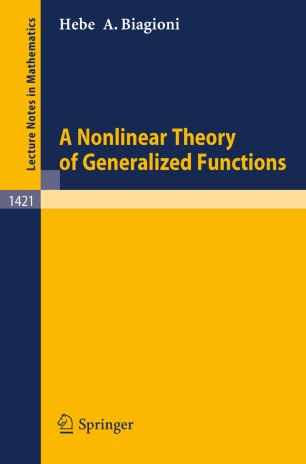 A Nonlinear Theory of Generalized Functions

This book provides a simple introduction to a nonlinear theory of generalized functions introduced by J.F. Colombeau, which gives a meaning to any multiplication of distributions. This theory extends from pure mathematics (it presents a faithful generalization of the classical theory of C? functions and provides a synthesis of most existing multiplications of distributions) to physics (it permits the resolution of ambiguities that appear in products of distributions), passing through the theory of partial differential equations both from the theoretical viewpoint (it furnishes a concept of weak solution of pde's leading to existence-uniqueness results in many cases where no distributional solution exists) and the numerical viewpoint (it introduces new and efficient methods developed recently in elastoplasticity, hydrodynamics and acoustics). This text presents basic concepts and results which until now were only published in article form. It is in- tended for mathematicians but, since the theory and applications are not dissociated it may also be useful for physicists and engineers. The needed prerequisites for its reading are essentially reduced to the classical notions of differential calculus and the theory of integration over n-dimensional euclidean spaces.