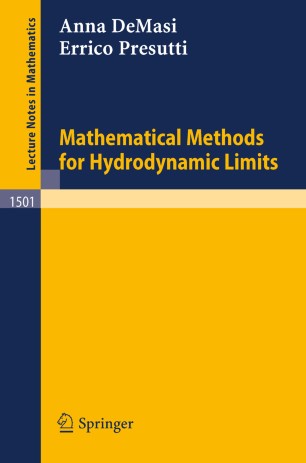 Entropy inequalities, correlation functions, couplings between stochastic processes are powerful techniques which have been extensively used to give arigorous foundation to the theory of complex, many component systems and to its many applications in a variety of fields as physics, biology, population dynamics, economics, ... The purpose of the book is to make theseand other mathematical methods accessible to readers with a limited background in probability and physics by examining in detail a few models where the techniques emerge clearly, while extra difficulties arekept to a minimum. Lanford's method and its extension to the hierarchy of equations for the truncated correlation functions, the v-functions, are presented and applied to prove the validity of macroscopic equations forstochastic particle systems which are perturbations of the independent and of the symmetric simple exclusion processes. Entropy inequalities are discussed in the frame of the Guo-Papanicolaou-Varadhan technique and of theKipnis-Olla-Varadhan super exponential estimates, with reference to zero-range models. Discrete velocity Boltzmann equations, reaction diffusion equations and non linear parabolic equations are considered, as limits of particles models. Phase separation phenomena are discussed in the context of Glauber+Kawasaki evolutions and reaction diffusion equations. Although the emphasis is onthe mathematical aspects, the physical motivations are explained through theanalysis of the single models, without attempting, however to survey the entire subject of hydrodynamical limits.