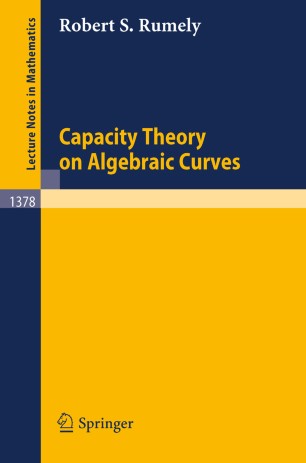 Capacity is a measure of size for sets, with diverse applications in potential theory, probability and number theory. This book lays foundations for a theory of capacity for adelic sets on algebraic curves. Its main result is an arithmetic one, a generalization of a theorem of Fekete and Szegö which gives a sharp existence/finiteness criterion for algebraic points whose conjugates lie near a specified set on a curve. The book brings out a deep connection between the classical Green's functions of analysis and Néron's local height pairings; it also points to an interpretation of capacity as a kind of intersection index in the framework of Arakelov Theory. It is a research monograph and will primarily be of interest to number theorists and algebraic geometers; because of applications of the theory, it may also be of interest to logicians. The theory presented generalizes one due to David Cantor for the projective line. As with most adelic theories, it has a local and a global part. Let /K be a smooth, complete curve over a global field; let Kv denote the algebraic closure of any completion of K. The book first develops capacity theory over local fields, defining analogues of the classical logarithmic capacity and Green's functions for sets in (Kv). It then develops a global theory, defining the capacity of a galois-stable set in (Kv) relative to an effictive global algebraic divisor. The main technical result is the construction of global algebraic functions whose logarithms closely approximate Green's functions at all places of K. These functions are used in proving the generalized Fekete-Szegö theorem; because of their mapping properties, they may be expected to have other applications as well.