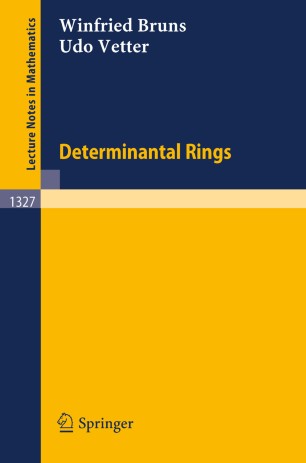 Determinantal rings and varieties have been a central topic of commutative algebra and algebraic geometry. Their study has attracted many prominent researchers and has motivated the creation of theories which may now be considered part of general commutative ring theory. The book gives a first coherent treatment of the structure of determinantal rings. The main approach is via the theory of algebras with straightening law. This approach suggest (and is simplified by) the simultaneous treatment of the Schubert subvarieties of Grassmannian. Other methods have not been neglected, however. Principal radical systems are discussed in detail, and one section is devoted to each of invariant and representation theory. While the book is primarily a research monograph, it serves also as a reference source and the reader requires only the basics of commutative algebra together with some supplementary material found in the appendix. The text may be useful for seminars following a course in commutative ring theory since a vast number of notions, results, and techniques can be illustrated significantly by applying them to determinantal rings.