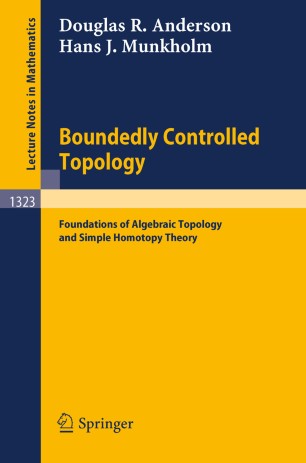 Several recent investigations have focused attention on spaces and manifolds which are non-compact but where the problems studied have some kind of "control near infinity". This monograph introduces the category of spaces that are "boundedly controlled" over the (usually non-compact) metric space Z. It sets out to develop the algebraic and geometric tools needed to formulate and to prove boundedly controlled analogues of many of the standard results of algebraic topology and simple homotopy theory. One of the themes of the book is to show that in many cases the proof of a standard result can be easily adapted to prove the boundedly controlled analogue and to provide the details, often omitted in other treatments, of this adaptation. For this reason, the book does not require of the reader an extensive background. In the last chapter it is shown that special cases of the boundedly controlled Whitehead group are strongly related to lower K-theoretic groups, and the boundedly controlled theory is compared to Siebenmann's proper simple homotopy theory when Z = IR or IR2.