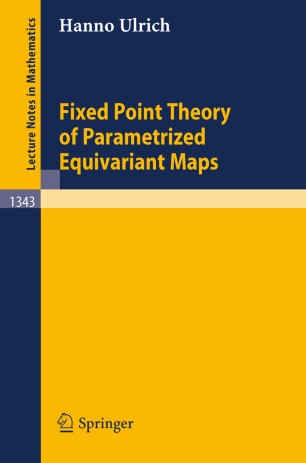 The first part of this research monograph discusses general properties of G-ENRBs - Euclidean Neighbourhood Retracts over B with action of a compact Lie group G - and their relations with fibrations, continuous submersions, and fibre bundles. It thus addresses equivariant point set topology as well as equivariant homotopy theory. Notable tools are vertical Jaworowski criterion and an equivariant transversality theorem. The second part presents equivariant cohomology theory showing that equivariant fixed point theory is isomorphic to equivariant stable cohomotopy theory. A crucial result is the sum decomposition of the equivariant fixed point index which provides an insight into the structure of the theory's coefficient group. Among the consequences of the sum formula are some Borsuk-Ulam theorems as well as some folklore results on compact Lie-groups. The final section investigates the fixed point index in equivariant K-theory. The book is intended to be a thorough and comprehensive presentation of its subject. The reader should be familiar with the basics of the theory of compact transformation groups. Good knowledge of algebraic topology - both homotopy and homology theory - is assumed. For the advanced reader, the book may serve as a base for further research. The student will be introduced into equivariant fixed point theory; he may find it helpful for further orientation.