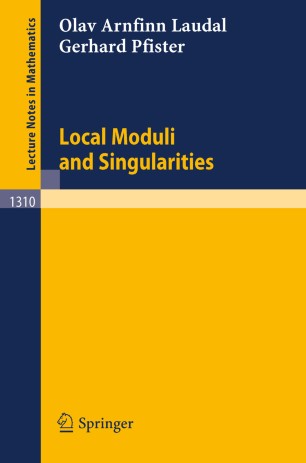 This research monograph sets out to study the notion of a local moduli suite of algebraic objects like e.g. schemes, singularities or Lie algebras and provides a framework for this. The basic idea is to work with the action of the kernel of the Kodaira-Spencer map, on the base space of a versal family. The main results are the existence, in a general context, of a local moduli suite in the category of algebraic spaces, and the proof that, generically, this moduli suite is the quotient of a canonical filtration of the base space of the versal family by the action of the Kodaira-Spencer kernel. Applied to the special case of quasihomogenous hypersurfaces, these ideas provide the framework for the proof of the existence of a coarse moduli scheme for plane curve singularities with fixed semigroup and minimal Tjurina number . An example shows that for arbitrary the corresponding moduli space is not, in general, a scheme. The book addresses mathematicians working on problems of moduli, in algebraic or in complex analytic geometry. It assumes a working knowledge of deformation theory.