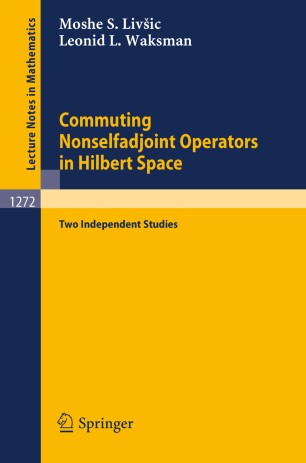 Classification of commuting non-selfadjoint operators is one of the most challenging problems in operator theory even in the finite-dimensional case. The spectral analysis of dissipative operators has led to a series of deep results in the framework of unitary dilations and characteristic operator functions. It has turned out that the theory has to be based on analytic functions on algebraic manifolds and not on functions of several independent variables as was previously believed. This follows from the generalized Cayley-Hamilton Theorem, due to M.S.Livsic: "Two commuting operators with finite dimensional imaginary parts are connected in the generic case, by a certain algebraic equation whose degree does not exceed the dimension of the sum of the ranges of imaginary parts." Such investigations have been carried out in two directions. One of them, presented by L.L.Waksman, is related to semigroups of projections of multiplication operators on Riemann surfaces. Another direction, which is presented here by M.S.Livsic is based on operator colligations and collective motions of systems. Every given wave equation can be obtained as an external manifestation of collective motions. The algebraic equation mentioned above is the corresponding dispersion law of the input-output waves.