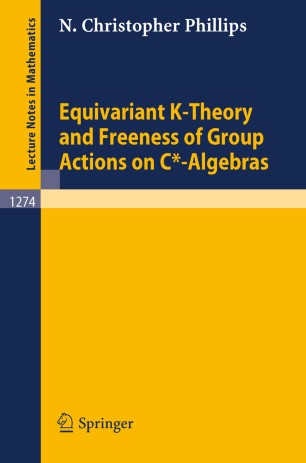 Equivariant K-Theory and Freeness of Group Actions on C*-Algebras

Freeness of an action of a compact Lie group on a compact Hausdorff space is equivalent to a simple condition on the corresponding equivariant K-theory. This fact can be regarded as a theorem on actions on a commutative C*-algebra, namely the algebra of continuous complex-valued functions on the space. The successes of "noncommutative topology" suggest that one should try to generalize this result to actions on arbitrary C*-algebras. Lacking an appropriate definition of a free action on a C*-algebra, one is led instead to the study of actions satisfying conditions on equivariant K-theory - in the cases of spaces, simply freeness. The first third of this book is a detailed exposition of equivariant K-theory and KK-theory, assuming only a general knowledge of C*-algebras and some ordinary K-theory. It continues with the author's research on K-theoretic freeness of actions. It is shown that many properties of freeness generalize, while others do not, and that certain forms of K-theoretic freeness are related to other noncommutative measures of freeness, such as the Connes spectrum. The implications of K-theoretic freeness for actions on type I and AF algebras are also examined, and in these cases K-theoretic freeness is characterized analytically.