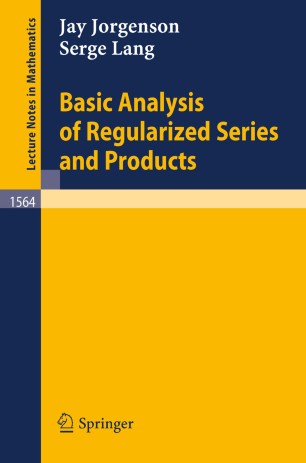 Analytic number theory and part of the spectral theory of operators (differential, pseudo-differential, elliptic, etc.) are being merged under amore general analytic theory of regularized products of certain sequences satisfying a few basic axioms. The most basic examples consist of the sequence of natural numbers, the sequence of zeros with positive imaginary part of the Riemann zeta function, and the sequence of eigenvalues, say of a positive Laplacian on a compact or certain cases of non-compact manifolds. The resulting theory is applicable to ergodic theory and dynamical systems; to the zeta and L-functions of number theory or representation theory and modular forms; to Selberg-like zeta functions; andto the theory of regularized determinants familiar in physics and other parts of mathematics. Aside from presenting a systematic account of widely scattered results, the theory also provides new results. One part of the theory deals with complex analytic properties, and another part deals with Fourier analysis. Typical examples are given. This LNM provides basic results which are and will be used in further papers, starting with a general formulation of Cram r's theorem and explicit formulas. The exposition is self-contained (except for far-reaching examples), requiring only standard knowledge of analysis.