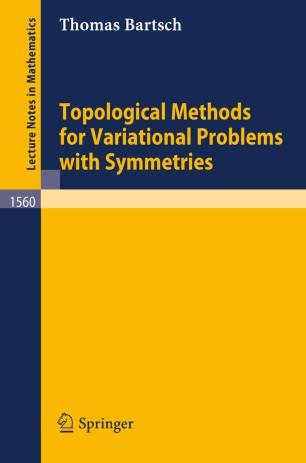 Symmetry has a strong impact on the number and shape of solutions to variational problems. This has been observed, for instance, in the search for periodic solutions of Hamiltonian systems or of the nonlinear wave equation; when one is interested in elliptic equations on symmetric domains or in the corresponding semiflows; and when one is looking for "special" solutions of these problems. This book is concerned with Lusternik-Schnirelmann theory and Morse-Conley theory for group invariant functionals. These topological methods are developed in detail with new calculations of the equivariant Lusternik-Schnirelmann category and versions of the Borsuk-Ulam theorem for very general classes of symmetry groups. The Morse-Conley theory is applied to bifurcation problems, in particular to the bifurcation of steady states and hetero-clinic orbits of O(3)-symmetric flows; and to the existence of periodic solutions nearequilibria of symmetric Hamiltonian systems. Some familiarity with the usualminimax theory and basic algebraic topology is assumed.