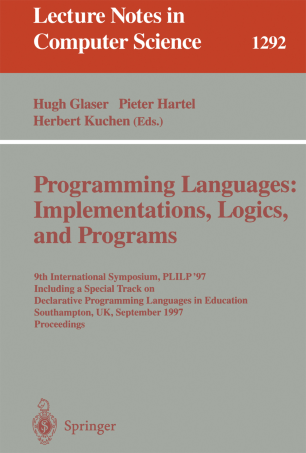 This volume constitutes the refereed proceedings of the 9th International Symposium on Programming Languages, Implementations, Logics and Programs, PLILP '97, held in Southampton, UK, in September 1997, including a special track on Declarative Programming in Education.
The volume presents 25 revised full papers selected from 68 submissions. Also included are one invited paper and three posters. The papers are devoted to exploring the relation between implementation techniques, the logic of the languages, and the use of the languages in construcing real programs. Topics of interest include implementation of declarative concepts, integration of paradigms, program analysis and transformation, programming environments, executable specifications, reasoning about language constructs, etc.