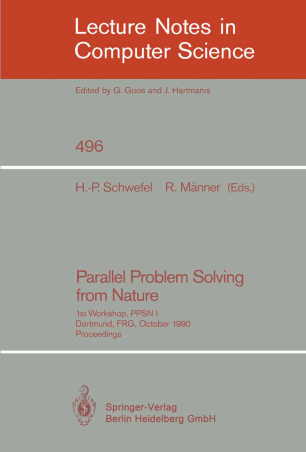 With the appearance of massively parallel computers, increased attention has been paid to algorithms which rely upon analogies to natural processes. This development defines the scope of the PPSN conference at Dortmund in 1990 whose proceedings are presented in this volume. The subjects treated include: - Darwinian methods such as evolution strategies and genetic algorithms; - Boltzmann methods such as simulated annealing; - Classifier systems and neural networks; - Transfer of natural metaphors to artificial problem solving. The main objectives of the conference were: - To gather theoretical results about and experimental comparisons between these algorithms, - To discuss various implementations on different parallel computer architectures, - To summarize the state of the art in the field, which was previously scattered widely both among disciplines and geographically.