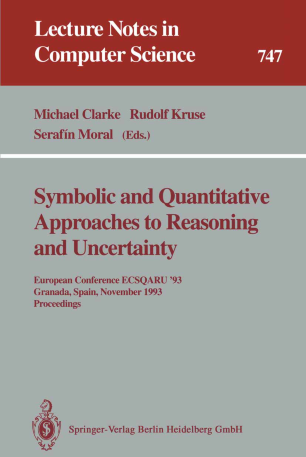 ECSQARU: European Conference on Symbolic and Quantitative Approaches to Reasoning and Uncertainty

Symbolic and Quantitative Approaches to Reasoning and Uncertainty

In recent years it has become apparent that an important part of the theory of artificial intelligence is concerned with reasoning on the basis of uncertain, incomplete, or inconsistent information. A variety of formalisms have been developed, including nonmonotonic logic, fuzzy sets, possibility theory, belief functions, and dynamic models of reasoning such as belief revision and Bayesian networks. Several European research projects have been formed in the area and the first European conference was held in 1991. This volume contains the papers accepted for presentation at ECSQARU-93, the European Conference on Symbolicand Quantitative Approaches to Reasoning and Uncertainty, held at the University of Granada, Spain, November 8-10, 1993.