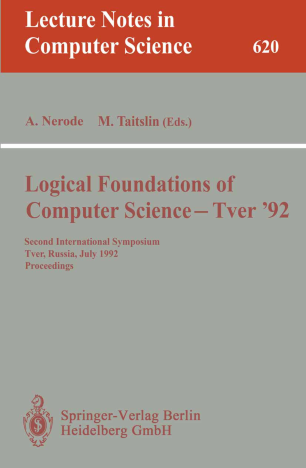 This volume presents the papers selected for the Symposium Logic at Tver '92, held at Sokol, near Tver, Russia in July 1992. It is the second in a series of international symposia on logical foundations of computer science held in Russia. The meeting is a joint effort of scholars from both the former Soviet Union and the West, and indicates a new era of international cooperation. Sponsors of the meeting include: the Association for Computing Machinery, the Association for Symbolic Logic, andthe Committee on Mathematical Foundations of Computer Science of IEEE. The book is a unique source of information on the state of computer science research in the former Soviet Union and presents important discoveries in the area of logical foundations of computer science.