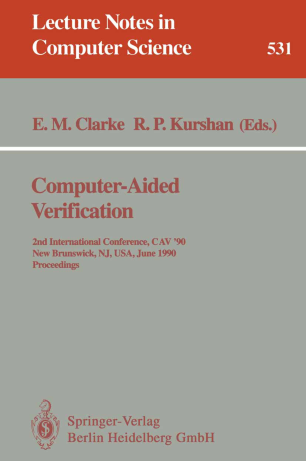 This volume contains the proceedings of the second workshop on Computer Aided Verification, held at DIMACS, Rutgers University, June 18-21, 1990. Itfeatures theoretical results that lead to new or more powerful verification methods. Among these are advances in the use of binary decision diagrams, dense time, reductions based upon partial order representations and proof-checking in controller verification. The motivation for holding a workshop on computer aided verification was to bring together work on effective algorithms or methodologies for formal verification - as distinguished, say,from attributes of logics or formal languages. The considerable interest generated by the first workshop, held in Grenoble, June 1989 (see LNCS 407), prompted this second meeting. The general focus of this volume is on the problem of making formal verification feasible for various models of computation. Specific emphasis is on models associated with distributed programs, protocols, and digital circuits. The general test of algorithm feasibility is to embed it into a verification tool, and exercise that tool on realistic examples: the workshop included sessionsfor the demonstration of new verification tools.