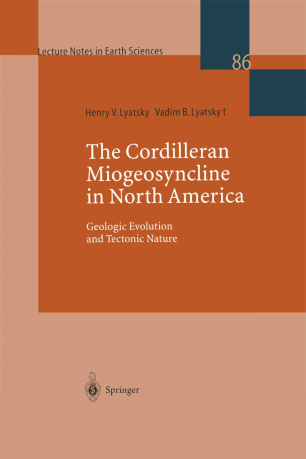 The Cordilleran Miogeosyncline in North America

Steep crustal-scale faults, having their origins in the Late Archean and Early Proterozoic and trending NE-SW, which define the fundamental block lithospheric structure of the North American craton, are seen from geological and geophysical evidence to continue far into the interior of the Late Proterozoic-Phanerozoic Canadian Cordilleran mobile megabelt. This suggests that variously reworked ex-cratonic basement blocks underlie much of the Cordillera. The western edge of the modern craton is probably near the Rocky Mountain-Omineca belt boundary, where Cordilleran tectonic reworking of the crystalline crust is first encountered; the Rocky Mountain fold-and-thrust belt on the east side of the Cordillera is evidently rootless and overlies the undisturbed cratonic basement. Phanerozoic differences between the Cordilleran tectonic belts, resulting from a long, dissimilar, multi-cycle history of waxing and waning orogenesis apparent from the rock record, lie chiefly in the degree of indigenous tectonic remobilization and reworking of the ancient crust.