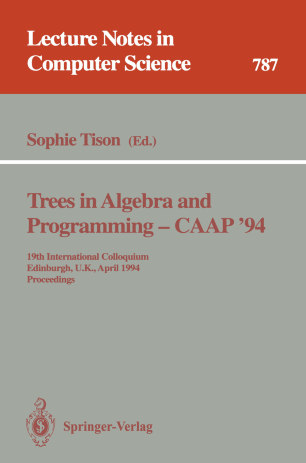 Trees in Algebra and Programming — CAAP'94

This volume contains the papers selected for presentation at the 19th Colloquium on Trees in Algebra and Programming (CAAP '94), which was held jointly with the fifth European Symposium on Programming (ESOP '94) in Edinburgh in April 1994. Originally this colloquium series was devoted to the algebraic and combinatorial properties of trees, and their role in various fields of computer science. Taking into account the evolution of computer science, CAAP '94 focuses on logical, algebraic and combinatorial properties of discrete structures (strings, trees, graphs, etc.); the topics also include applications to computer science provided that algebraic or syntactic methods are involved. The volume contains 21 papers selected from 51 submissions as well as two invited papers.