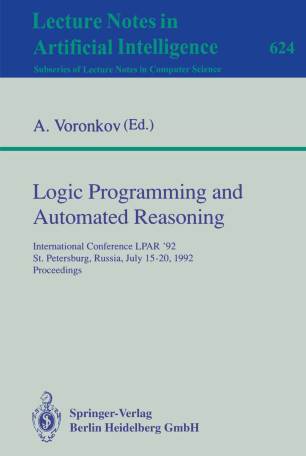 This volume contains the proceedings of LPAR '92, the international conference on logic programming and automated reasoning held in St. Petersburg in July 1992. The aim of the conference was to bring together researchers from the Russian and the international logic programming and theorem proving communities. The topics of interest covered by papers inthe volume include automated theorem proving, non-monotonic reasoning, applications of mathematical logic to computer science, deductive databases, implementation of declarative concepts, and programming in non-classical logics. LPAR '92 is the successor of the First and Second Russian Conferences on Logic Programming held in 1990 and 1991, respectively, the proceedings of which were publishedin LNAI Vol. 592.