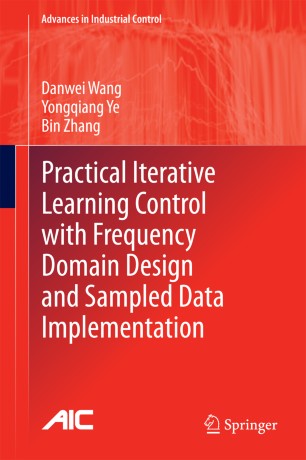 This book is on the iterative learning control (ILC) with focus on the design and implementation. We approach the ILC design based on the frequency domain analysis and address the ILC implementation based on the sampled data methods. This is the first book of ILC from frequency domain and sampled data methodologies. The frequency domain design methods offer ILC users insights to the convergence performance which is of practical benefits. This book presents a comprehensive framework with various methodologies to ensure the learnable bandwidth in the ILC system to be set with a balance between learning performance and learning stability. The sampled data implementation ensures effective execution of ILC in practical dynamic systems. The presented sampled data ILC methods also ensure the balance of performance and stability of learning process. Furthermore, the presented theories and methodologies are tested with an ILC controlled robotic system. The experimental results show that the machines can work in much higher accuracy than a feedback control alone can offer. With the proposed ILC algorithms, it is possible that machines can work to their hardware design limits set by sensors and actuators. The target audience for this book includes scientists, engineers and practitioners involved in any systems with repetitive operations.

Dr. Danwei Wang received his Ph.D and MSE degrees from the University of Michigan, Ann Arbor in 1989 and 1984, respectively. He received his B.E degree from the South China University of Technology, China in 1982. Now, he is a professor in the School of Electrical and Electronic Engineering, Nanyang Technological University, Singapore. He served as head of Division of Control and Instrumentation from 2005 to 2011. He has served as general chairman, technical chairman and various positions in international conferences. He is an associate editor of International Journal of Humanoid Robotics and invited guest editor of various international journals. He was a recipient of Alexander von Humboldt fellowship, Germany. He has published widely in the areas of iterative learning control, repetitive control, fault diagnosis and failure prognosis, satellite formation dynamics and control, as well as manipulator/mobile robot dynamics, path planning, and control.

Dr. Yongqiang Ye received the B.E. and MEng degrees in electrical engineering from Zhejiang University, China, in 1994 and 1997, respectively, and the Ph.D. degree in electrical engineering from Nanyang Technological University, Singapore, in 2004. From 2006, he had been a Postdoctoral Research Fellow for 3 years in Canada with Lakehead University, Carleton University, and Dalhousie University, respectively. Since 2009, he has been a Professor with the College of Automation Engineering, Nanjing University of Aeronautics and Astronautics, Nanjing, China. He has authored or coauthored more than 24 international journal papers. His research interests include iterative learning control and repetitive control, power electronics control, and image processing. He is a senior member of IEEE.

Dr. Bin Zhang received the B.E. and M.E. degrees from Nanjing University of Science and Technology, Nanjing, China, in 1993 and 1999, respectively,  both in Mechanical Engineering, and the Ph.D. degree in Electrical Engineering from Nanyang Technological University, Singapore, in 2005. After his graduation, he joined the School of Electrical and Computer Engineering at Georgia Institute of Technology, Atlanta, GA as a post-doc research fellow. In 2009, he joined Impact Technologies, LLC, Rochester, NY as a senior project engineer and later lead engineer. Then, he joined the R&D of General Motors, Detroit, MI as a senior researcher in 2011. Since 2012, he has been an Assistant Professor in the Department of Electrical Engineering at the University of South Carolina, Columbia, SC.  He has about 15 years experience in dynamics and control, intelligent systems, mechatronics, prognostics and health management. He has authored and co-authored more than 80 papers in areas of his expertise. He is currently an Associate Editor for IEEE Transactions on Industrial Electronics, International Journal of Fuzzy Logic and Intelligent Systems. He is a senior member of IEEE.