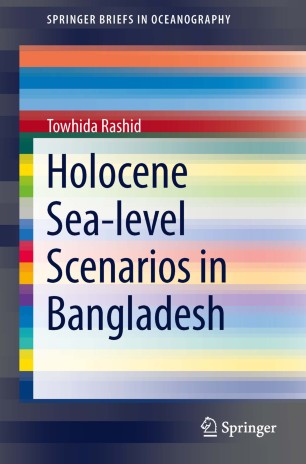 Part of the SpringerBriefs in Oceanography book series (BRIEFSOCEAN)

This Brief deals with the reconstruction of Holocene paleoenvironment in the central part of Bangladesh in relation to relative sea-level (RSL) changes which is 200 km north from the present coastline. Lithofacies characteristics, mangal peat, diatom and paleophysiographical evidences were considered to reconstruct the past position and C-14 ages were used to determine the time of formation of the relative sea-level during the Holocene. With standard reference datum the required m.s.l. at the surface of five sections are calculate and the RSL curve suggests that Bangladesh has experienced two mid Holocene RSL transgressions punctuated by regressions. The abundant marine diatom and mangrove pollens indicates that the highest RSL transgression in Bangladesh is around 6000 cal BP which is attained at least 4.5 to 5m higher than the modern m.s.l. After this phase, the relative sea-level started to fall and consequently a freshwater peat developed around 5980―5700 cal BP. The abundant mangrove pollens in salt-marsh succession shows the regression around 5500 cal BP and, the height was 1―2 m higher than the modern sea level. These and more interesting findings are discussed in this Brief.

Dr. Towhida Rashid is an Associate Professor in the Department of Geography and Environment at the University of Dhaka, Bangladesh. She obtained her PhD from Okayama University, Japan. Her research interest spans issues in physical geography, from coastal to marine ecosystem, to challenges in environmental issues. She has an established publication record in these areas.