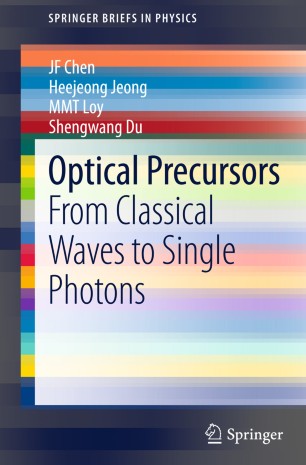 From Classical Waves to Single Photons

Ever since Einstein’s special relativity in 1905, the principle of invariant light speed in vacuum has been attracting attention from a wide range of disciplines. How to interpret the principle of light speed? Is light referred to continuous light, or light pulse with definite boundaries? Recent discovery of superluminal medium triggered vigorous discussion within the Physics community. Can communication via such “superluminal channel” break the speed limit and thus violate causality principle? Or, will a single photon, which is not governed by classical laws of Physics, tend to break the speed limit? To solve these problems, in this Brief we bring in optical precursor, the theoretical works for which started as early as 1914. This is a typical optical phenomenon combining wave propagation theory and light-wave interaction. Both theory and experimental works are covered in this Brief. The study of precursor verifies that the effective information carried by light pulses can never exceed the speed of light in vacuum- c. Further, through observation from nonclassical single photon source, the precursor rules out the probability of a single photon traveling with the speed, breaking the classical limit.