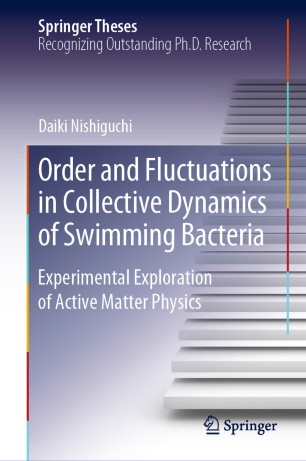 Order and Fluctuations in Collective Dynamics of Swimming Bacteria

This thesis focuses on experimental studies on collective motion using swimming bacteria as model active-matter systems. It offers comprehensive reviews of state-of-the-art theories and experiments on collective motion from the viewpoint of nonequilibrium statistical physics. The author presents his experimental studies on two major classes of collective motion that had been well studied theoretically. Firstly, swimming filamentous bacteria in a thin fluid layer are shown to exhibit true, long-range orientational order and anomalously strong giant density fluctuations, which are considered universal and landmark signatures of collective motion by many numerical and theoretical works but have never been observed in real systems. Secondly, chaotic bacterial turbulence in a three-dimensional dense suspension without any long-range order as described in the first half is demonstrated to be capable of achieving antiferromagnetic vortex order by imposing a small number of constraints with appropriate periodicity. The experimental results presented significantly advance our fundamental understanding of order and fluctuations in collective motion of motile elements and their future applications.

Daiki Nishiguchi is an Assistant Professor at the University of Tokyo. He received his bachelor’s, master’s and Ph.D. degrees from the Department of Physics, Graduate School of Science at the University of Tokyo in 2012, 2014 and 2017, respectively. After serving as a Postdoctoral Researcher at Service de Physique de l'Etat Condensé, CEA-Saclay in France in 2017-2018, and at the Department of Cell Biology & Infection, Pasteur Institute in France in 2018-2019, he was appointed as the current position.

During his Ph.D. program, he was supported by a university fellowship program, Advanced Leading Graduate Course for Photon Science, as well as Research Fellowship for Young Scientists from the Japan Society for Promotion of Science. He has received awards for his presentations at conferences, a Ph.D. program research award, and the Young Scientist Award of the Physical Society of Japan.