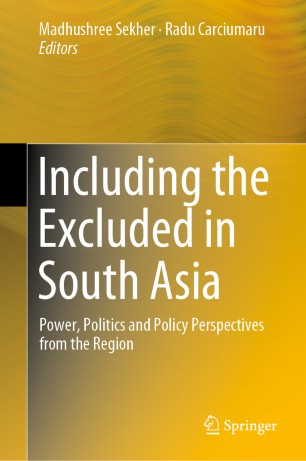 Including the Excluded in South Asia

This book analyses and discusses the multiple dimensions of social exclusion/inclusion seen in South Asia. It not only captures how ‘social exclusion’ is intrinsic to deprivation or deprivation in itself, but also the processes of political engagement and social interactions that the socially excluded develop as strategies and networks for their advancement. Consequently, the book goes beyond structures or agency, and examines the question of a more dynamic approach to provide spaces for the ‘socially excluded’ to self-manage exclusion, thereby raising discussions around the contested positions that underlie development discourse on social inequality.
While social exclusion linked to identities is studied, the book argues that hierarchies and inequalities based on social identities cut across and affect various groups of excluded. Consequently, these phenomena create or lead to various processes of exclusion. The book illustrates that social exclusion should not be limited to privileging the differences that characterize the exclusionary processes, but should also comprise underpinning strategies of ‘inclusion’, emphasizing the need to focus on imperatives ‘to include’. As a result, the book acknowledges that social exclusion is not limited to analyzing the different identities that face exclusion, but also understanding the systems and processes that create social exclusion, or create opportunities for inclusion of the excluded.
The book addresses readership across academic disciplines (including in the growing field of state capacity and governance), and practitioners (administrators and policy-making communities). Conclusively, the book, provides a platform to intensively exchange the multifaceted and critical issue of social exclusion/inclusion, and thus contributes to inclusive sustainable development discourse.

Madhushree Sekher is Professor at Tata Institute of Social Sciences, Mumbai. Institutions, political economy of representation, governance, inclusive development and policy implementation are her core research interests. Her current research is on institutions for food security, inequalities and social welfare systems, and democratic representation in India. She has been a recipient of the Australian Research Council (Discovery) Grant, and grants from International Food Policy Research Institute (IFPRI), Indian Council for Social Science Research and Sir Ratan Tata Trust. She is currently associated with an international research consortium to study ethnic power relations funded by Swiss Development Council and Swiss National Science Foundation. She was a Visiting Faculty at IFPRI-¬‐Washington, and Universities of Hohenheim, Sydney and Alberta, and at Cornell University. Author of many research articles and books, including ‘Feeding India: Livelihoods, Entitlements and Capabilities’ (Earthscan, 2013 and ‘Governance and Governed: Multi-¬‐Country Perspectives on State, Society and Development (Springer, 2017), she has a PhD in Political Science from the Institute for Social and Economic Change, Bangalore, and was recipient of World Bank Robert S. McNamara Fellowship for post-doctoral research.
Radu Carciumaru is Head of CrossCulture Programme at ifa (Institute for Foreign Policy, Germany) and associated researcher at the South Asia Institute, Heidelberg University. Prior to joining ifa, Radu Carciumaru acted as Resident Representative/Head of Heidelberg University’s New Delhi Branch Office and governing board member of the German Centre for Research and Innovation New Delhi, for over four years. Radu Carciumaru holds a PhD in Political Science from Heidelberg University and has several publications on institutional design in plural societies, conflict negotiation, prevention and management.
He is board member of the Research Committee Politics and Ethnicity (RC14) of the International Political Science Association (RC 14), co-founder of APSA foundation and Sri Lanka Working Group, fellow of South Asia Democratic Forum (SADF, Brussels), research fellow of the Centre for the Study of Law and Governance, member of the editorial board of Politex (St Petersburg State University, Russia), former managing editor of the Heidelberg Papers in South Asian and Comparative Politics (2010-2016), as well as former research fellow at the School of International Studies, Jawaharlal Nehru University and Assistant Professor of Political Science at Ashoka University. His areas of expertise include institutional design in plural societies, power sharing and negotiation theories, ethnic conflict regulation, international and regional cooperation, comparative politics and political economy.